Eddington Road, Nettlestone/Seaview, PO34 5EF, Isle of Wight, United Kingdom
Online Orders - Dispatched Within a Week - Now sent via DPD usually Next Day Delivery- Fully Tracked and Customised Delivery. If you wish to reschedule or trace a link will be sent by email and text.

A guide to growing Caradonna 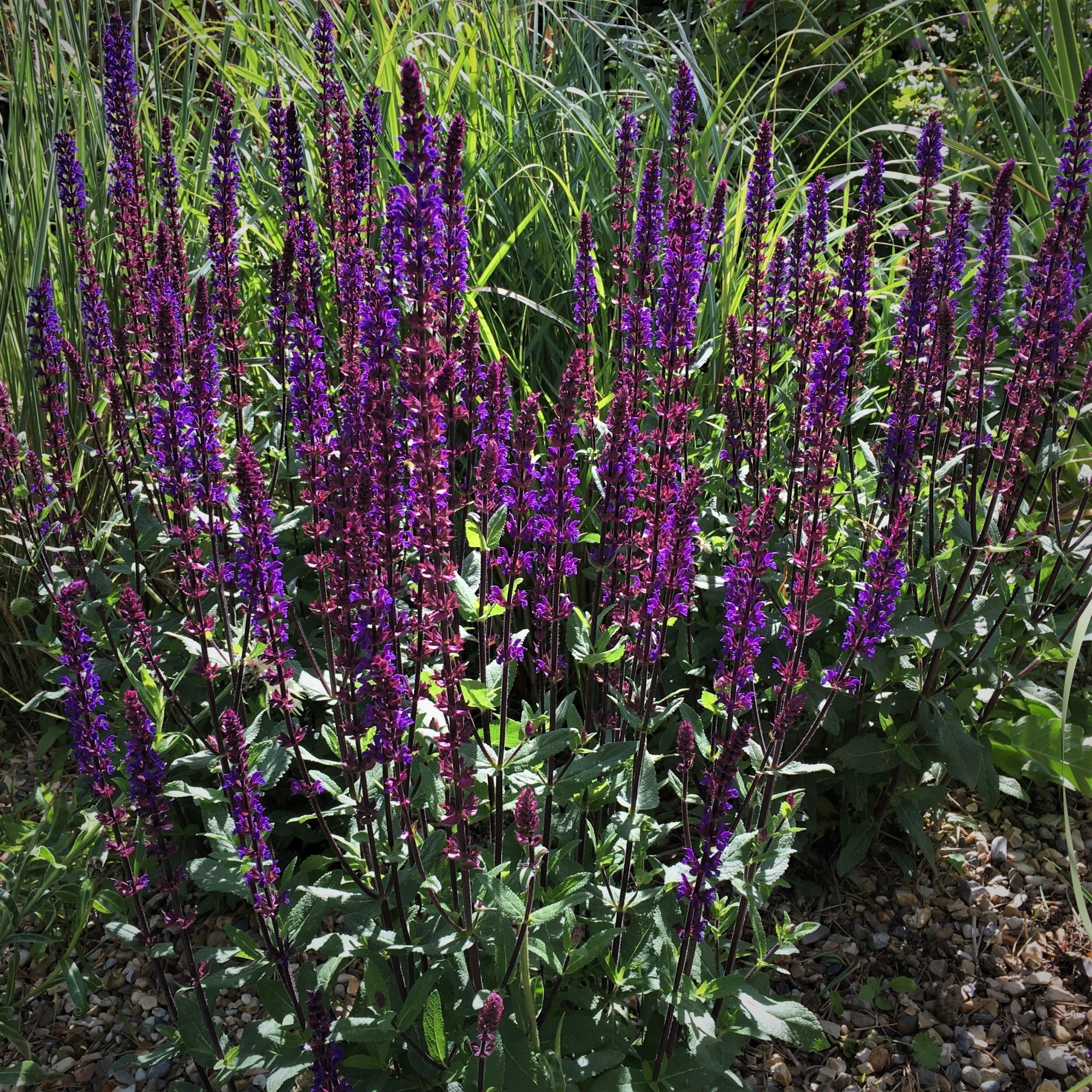 Simple, stunning, yet perfectly aesthetic, classic S. ‘Caradonna’ is a popular plant that blooms in a beautiful shade of purple at the start of summer, and looks wonderfully colourful for months.

It is easy to grow, straightforward to look after, and complements any garden style or design you might have or are contemplating.

Here at Eddington House Nursery, we stock a huge range of different flowers and plants, but Salvia nemerosa ‘Caradonna’ otherwise known as ‘Caradonna’, has always been one of our best sellers.

What Is S. ‘Caradonna’

S. ‘Caradonna’ is one of our most popular plants for good reason.

It not only looks fantastic, but is simple and easy to grow in your own garden.

Little experience is needed for it to flourish, and it complements well a wide range of other plants and flowers.

S. ‘Caradonna’ is easily recognisable by its long blue-purple flowers, which extend at regular intervals along the long, vertical stem.

The stem is purplish in colour too, making this a wonderfully vibrant species of plant.

The botanical (Scientific) name for this plant is; Salvia nemerosa ‘Caradonna’, and its ease of growth has ensured it has an incredible distribution.

You can find it all over Europe, and even as far as Asia – from the Isle of Wight to Turkey!

S. ‘Caradonna’ has been cultivated for many hundreds of years by gardeners, and it’s somewhat of a classic selection, suited to both novices and those with years of experience.

Colloquially, S. ‘Caradonna’ has many other names, one of the most common being woodland sage.

What Soil Does S. ‘Caradonna’ Need?

S. ‘Caradonna’ is a hardy sage and, as such, it thrives in minimal conditions, requiring little attention from the gardener to flourish for many years.

For the best results, you’ll want to plant your S. ‘Caradonna’ in a light, well-drained soil.

The soil should drain readily on its own accord, allowing you to apply minimal work to the care of S. ‘Caradonna’.

The best soils are chalk, loam or sand, which are moist yet also drain well.

The soil need only be moderately fertile and moderately moist for good results.

Chalk works particularly well for growing S. ‘Caradonna’, as the plant prefers alkaline conditions, although it can also grow in less alkaline soils, such is its hardiness.

Alkaline soils such as chalk provide optimal conditions however, and make for even better growth of the sage plant. S. ‘Caradonna’ is easy to look after, so growing your plants in the perfect soil from the beginning will ensure they will bloom every year for many years to come, with minimal work on your part each season.

Importantly for the best S. ‘Caradonna’ blooms in summer, you should make sure to keep the soil moist, especially if things become particularly dry in your local climate. S. ‘Caradonna’ prefers sunny conditions and as much direct sunlight as possible.

Direct sun does, of course, dry out the soil, especially when there are prolonged periods of sunlight shining on it. Although S. ‘Caradonna’ is hardy, it will never be harmful to moisten the soil when you think it’s getting too dry for the plant.

Do I Need Fertiliser?

Because S. ‘Caradonna’ is such an easily grown plant, it doesn’t generally require the application of fertiliser to the soil. Like all sage plants, S. ‘Caradonna’ grows well with little attention, and that means you don’t need to worry about fertilising – just one of many reasons why it’s such a popular plant to grow.

Of course, it won’t hurt if you do add a little bit of fertiliser.

Many gardeners will add a thin layer of fertiliser to the topsoil in spring before the blooming season arrives in May. This can help to strengthen the flowers and enhance their colour.

However, novice growers might be best to leave things alone, because adding too much fertiliser can be detrimental. S. ‘Caradonna’ looks best when it grows vertically, but if it grows too much, the top of the plants become unsupported and can begin to droop over – and that’s not the look a S. ‘Caradonna’ grower is usually after.

What Is the Optimum Growing Temperature?

S. ‘Caradonna’ grows best when it’s placed in direct sunlight and they grow optimally at a temperature of around 20 degrees Celsius, which occurs in the UK from May through the summer.

However, S. ‘Caradonna’ can survive in cold temperatures too. Even if it gets down to -20 degrees Celsius, the plant won’t die.

This means S. ‘Caradonna’ can survive cold winters, before blooming again in the summer with the onset of warmer temperatures.

Placing S. ‘Caradonna’ in direct sunlight helps to produce brighter coloured flowers, but they also flower in semi-shade and can survive in fully-shaded areas too.

Do You Need to Deadhead?

Deadheading is the term that’s commonly used by gardeners to describe the process of removing flowers from a plant when the flowers begin to fade in colour or when they have obviously died.

It is a relatively simple gardening technique, and one that requires little skill and just a pair of pruning shears.

The vibrancy of S. ‘Caradonna’ comes from its beautiful, bright, blue-purple colour, but as with any plant this colour can fade as the flowers begin to age and eventually die.

To keep S. ‘Caradonna’ plants looking at their best, then yes, you should deadhead them.

Deadheading is a great technique for any gardener to learn, and S. ‘Caradonna’ provides good training for novice gardeners because it can be deadheaded regularly to keep it in bloom.

Taking away fading or dead flowers on a S. ‘Caradonna’ plant encourages the growth of new flowers in their place. This means that by regularly deadheading the plant, you will keep it as bright and colourful as possible.

Salvia plants will bloom of their own accord, and generally they’ll bloom at least twice in any growing season.

That’s without you doing anything.

By deadheading, you can increase the number of blooms in the season, doubling or perhaps even tripling that number.

With simple maintenance, you can get the most out of your S. ‘Caradonna’ and keep it looking beautifully purple throughout the summer.

As S. ‘Caradonna’ blooms most vibrantly from May onwards, gardeners will often focus their deadheading in spring, during the build-up to the blooming season.

A great tip is to deadhead S. ‘Caradonna’ plants right after their first bloom at the start of the season.

Get rid of the dead flowers or the flowers that haven’t coloured as vibrantly as you want, and you’ll pave the way for bigger and more beautiful flowers in a few weeks time, and through the rest of the season too.

Towards the end of autumn, you should prune your plants back again to help the S. ‘Caradonna’ survive the cold winter season.

What Time(s) of Year Should You Plant S. ‘Caradonna’?

S. ‘Caradonna’ blooms brightest from May onwards, but one of the best things about this particular plant is the fact it can be planted all year round – as long as the soil isn’t frozen.

That’s a long planting season by any stretch.

For most of the year, you’ll get away with simply putting your new S. ‘Caradonna’ in the soil and letting it grow, with little to worry about.

S. ‘Caradonna’ grows quickly too, so many gardeners choose to plant in March and April immediately before the blooming season, to have the freshest flowers ready for summer.

The end of the season is also a popular time to plant S. ‘Caradonna’, with September and October providing a useful window before the colder climes and colder soil temperatures of winter begin to set in.

Young S. ‘Caradonna’ will survive the cold and be ready to bloom the following summer after a little deadheading.

As we’ve mentioned, S. ‘Caradonna’ grows easily with little outside help or attention, and it can do so almost any time of the year.

Now, we hope you can see why S. ‘Caradonna’ is such a popular choice amongst gardeners.

It’s low maintenance, can be planted almost all year round and, when it blooms, it really does bloom beautifully.

We’re Here for All Your Planting Needs

Eddington House Nursery is the place for plants.

With a wonderful range for sale, we specialise in growing and planting all manner of different varieties, including S. ‘Caradonna’ and much more.

We are one of the most popular garden nurseries in the Isle of Wight, and we even run an annual flower show!

In fact, as our S. ‘Caradonna’ always blooms best in May, it’s just in time for our Rare Plant Fair here at the nursery.

Our lovely staff are on hand to help you with all your planting needs.

If you’d like to find out more about how to grow S. ‘Caradonna’ at home, or want to buy some of these beautiful plants for your garden, contact Eddington House Nursery today and speak with a member of our expert team.